There will be an Open Night for Gaelcholáiste Charraig Uí Leighin, it will take place in the Carrigaline Court Hotel tonight Monday 29th September 2014 @ 7.30pm

Please see link below for the Minutes of the PA Meeting which took place on the 16th of September 2014.

The committee for the 2015-15 Year are as follows:
Chairperson: Dervilla Wrynn

Krafty Kids has a wide range of art and craft activities and projects for small groups of children of all abilities.

New Terms beginning on Monday 6th of October 2014 in Saíle.

Thank you for your old mobile phones - we are nearly there! 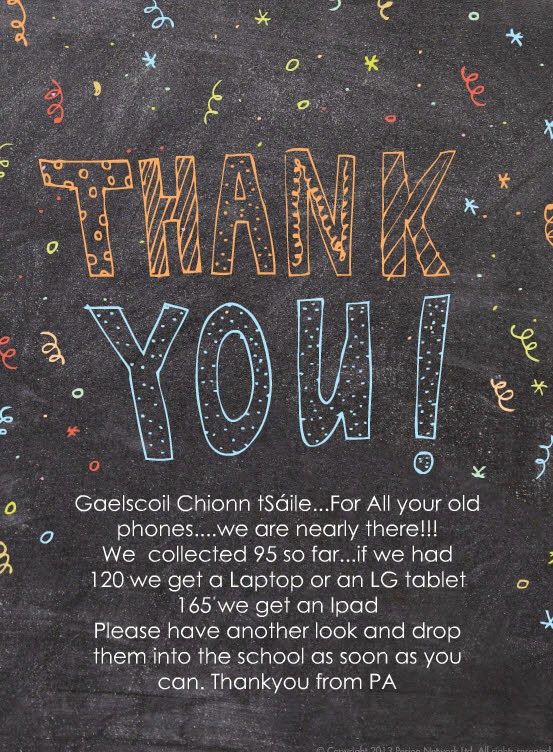 There has been a suggestion to help to simplify the purchase and organisation of school Blazers for First Communion boys.  Currently blazers have to be purchased in Marks and Spencer and branded with school crests. The parents Association would like to organise a pool of Blazers that could be re-used from year to year saving parents time and the cost of purchase.

As a first step, if anyone has an unwanted blazer and wishes to donate it to the school to be used by future Communion children, please drop it into Hilda.

Depending on the success of this, we may organise a uniform swap event later in the year.

Your feedback on this initiative is welcome!

Apologies to everyone trying to access the main school calendar on our websites.   We have an ongoing support ticket open with Google Apps to see why it is not available and whether or not they can recover it for us.  If they cannot resolve the issue we will have to create and populate a new one.

Note: maintaining the site requires very little technical expertise, you just need access to a computer and the internet!

If you are having problems or need any assistance using the school website, the WebTeam volunteers are available to help and can be contacted with any access or e-mail subscription questions.

A suggestion/idea in regard to adopting a €5 in a card option for presents will be discussed at the next PA Meeting, which is being held on Tuesday 16th September, 2014, at 8pm, in the Powder Room, White Lady Hotel.
For the attention of all Classes:
Now that the new school year is well underway, and having spoken to a wide circle of parents from the different Rangs in the school, Carol O Callaghan (AKA Mam of Alice, Ted, Maisie, Miah) and myself (AKA Mam of Crios, Cian and Beibhinn) would like to make the following suggestion:
Going forward, with regard to birthday parties, we would like to suggest adopting the “€5 in a card” (per child) as another option for a birthday present for the children.
Locally Dunderrow and Belgooly schools do this and it seems to work very well.  We have since learned, from being in contact with other parents in our school, that schools all over the country have chosen to do this too, very successfully.
We would like to stress at this point, that this is NOT school policy, nor is it something that everybody has to conform to – it isn’t a directive from the teachers in the school – they have no involvement in this at all - but rather a parent driven initiative.  In the current economic climate we thought it might be a way of giving parents one less worry/hassle to deal with – albeit a very small one - some parents have several siblings attending the school!
The decision to consider this “€5 in a card”, we think, is firstly a very personal one and up to each parent to decide whether they would like to do it or not, but it is also a class decision and parents in each class will have to decide whether this option is right for their class or not.  Or indeed it might be the decision to go ahead with a “half and half” option whereby the people in a class who want to give/receive €5 do so and the people who like to give/receive presents do so – the birthday boy or girl then gets a variety of presents/money on his/her special day.  It has also been suggested that €5 euro, whether it be money in a card or a present, is enough to spend on school party presents – again this is just about sharing what some parents have been talking about amongst themselves – it is, of course, naturally up to everybody individually to decide how much they would like to spend on their presents (this is just all about passing on/sharing the information!).

Thanks a mill for taking the time to read this,
Carol and Emma.
at Wednesday, September 10, 2014

Apologies but the the first PA meeting needs to be postponed until Tuesday 16th Sep 2014.

Ages 8 - 15 : open to anyone with an interest in singing. All aspects of singing are taught and developed in a friendly group setting, covering a wide range of styles.

Ages 4 -6 : A pre-instrumental class which introduces young children to music. A fun, easy approach to learning music interactively through songs and games.
at Monday, September 08, 2014 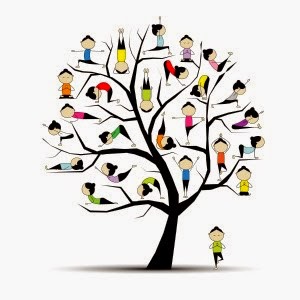 A fun yoga class for children where yoga is taught through story.  The aim of this course is to teach breathing & relaxation techniques, positive thinking and meditation, develop flexibility and strength, and to have fun while doing yoga.

This class is open to children from 8-12 years.  Class size limited.

The first PA meeting of this school year will take place at 8pm on Tuesday 9th Sep 2014 in the White Lady Hotel 'Powder Room'.  All parents, especially all new parents are welcome to attend.